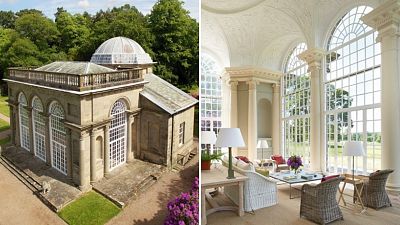 If you’re looking for a unique getaway this winter, why not explore the UK’s historic past in one of these extraordinary holiday rentals.

We’ve teamed up with Host Unusual to show you the best historic haunts in the the country.

So whether you want to lock yourself up in a former jail cell, or watch birds swoop over the Atlantic from the top of an observation tower, there’s something for every history lover here.

Here are our top six options:

If you’re after a quirky historical landmark, then look no further than the LV4 SULA Lightship.

A lighthouse in the form of a vessel, the ship went into service in 1959 and was originally stationed in the Humber Estuary. Her lens shone for 17 miles, guiding mariners safely back to shore.

After the vessel was decommissioned, she had a brief stint as a floating museum in South Wales, but is now moored in Gloucester Docks and kitted out as a luxurious holiday home.

The vessel sleeps up to four people, though sadly it’s not suitable for children, pets or those with mobility issues. With lots of restored fixtures and fittings, there’s plenty of original charm on display, from the original teak doors, to a wooden ladder leading to an escape hatch.

Once you’ve got your sea legs, you can explore the restaurants and bars of Gloucester, or simply relax on the bow deck with a coffee, or should that be a Navy rum?

If you’re a World War II buff, then this observation tower built by German occupying forces is the holiday let for you. On the edge of a weather-beaten cliff, the tower looks out over the Corbière Lighthouse and has enough room inside for six people.

Split over six floors, the radio tower is accessed by a winding concrete staircase and is full of observation slots so you can look out on the world below.

While it maintains lots of its original features, the tower has had some luxuries added in too, including shower rooms and under-floor heating.

It’s the observation deck that’s the real draw here though, with panoramic views across the Atlantic. If you pack your binoculars you can expect to see diving birds, boats and perhaps even a few dolphins. The minimum stay here is two nights, and it’s a great place to visit if you want to leave the world behind, as there’s no Wi-Fi either.

Set in the heart of the South Downs National Park, this old railway station was originally built in 1892. Formerly the station for Petworth, the station house has been lovingly restored and there are two rooms available, along with a further eight in the converted Pullman railway carriages outside.

The Pullman carriages are lined with polished wood, offering an old-fashioned feel, while the Station House Lower features a decadent walk-in shower and a super-king bed.

The luxury doesn’t stop at the door though, as in the station’s waiting room guests can enjoy a delicious breakfast each morning of their stay, or an afternoon tea if you fancy something sweet.

The station is a great place to stay if you’re planning a trip to Goodwood or the nearby theatres of Chichester. There’s also a great local pub, the Badgers Inn, on the doorstep and of course, the sweeping hills of the South Downs National Park.

If you’ve been a saint all year and feel like you deserve a break, what better way to treat yourself than with a stay in a converted church? The 19th century St Curig’s Church sleeps a whopping 16 people, so is great for family get-to-togethers and groups of friends.

Set in the mountain village of Capel Curig, Snowdonia National Park is literally on your doorstep here, so remember to pack your walking boots. Or, if you feel like relaxing, head outside to the hot tub where you can enjoy scenic views of the Snowdon Horseshoe.

The church offers some splendid views indoors too, including a mosaic ceiling. After dark, you can enjoy a game of table tennis or a quick round of snooker, before falling asleep beneath the stone-carved pulpit.

If you’re a bit of an adrenaline junkie, then head to the nearby Zipworld, or if you prefer the quiet life, tuck yourself away in one of the quaint local pubs.

You can travel further back in time with a stay in this 14th century tower in York. Sitting on the banks of the River Ouse, Lendal Tower was originally built to shore up the town’s defences, and stored a huge chain which was used to stop boats coming along the river.

In the Tudor era it was converted into a water tower, providing water for the city of York, but nowadays it’s a luxury holiday let for up to six people.

The property received a 5-star Gold Award from Visit England, and many of its original features remain in place, including wooden floors and large timber beams. Alongside the heritage, there are some modern luxuries too, including leather sofas, large double beds and a dining table fit for a feast.

Outside, there’s a private garden waiting for you, with a lawn and outdoor furniture so you can sit outside on warm summer evenings.

The tower’s best kept secret though is a huge roof terrace, with panoramic views across York. A ladder takes you up to the roof, where you can relax well into the night and enjoy majestic sunsets over this historic fortification.

Holiday rentals don’t get much more luxurious than the Temple of Diana in Shropshire’s Weston Park. Built in the 1760s, the temple was designed by architect James Paine and sits in parkland which was landscaped by the iconic landscape designer, Capability Brown.

The temple sleeps up to 6 people and offers its guests a truly unique experience - though at £1,679 (€2,000) for a seven night stay, luxury doesn’t come cheap.

Guests can spend their time relaxing in the orangery, a large conservatory with sweeping views out to the lawns beyond provided by floor-to-ceiling windows.

There’s also a cosy sitting room - where the lady of the Weston Park estate used to take tea - and a former octagonal music room, which has been converted into a dining room.

There’s lots to explore outdoors too, with Temple Woods and Temple Pool on your doorstep. On the estate you can enjoy fishing, clay pigeon shooting and archery and if you’re feeling brave your hosts can even arrange a hot air balloon trip for you.

If you manage to escape your room, there’s plenty to see and do outside the hotel too, including hikes on Bodmin Moor where you can explore the Camel trail before sinking back in one of the hotel’s free-standing baths.

This teenage pilot is solo flying around the world