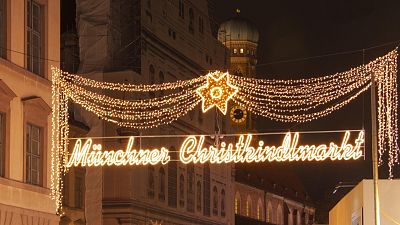 Munich’s famous Christmas market has been cancelled again this year after a spike in COVID-19 cases.

The market is one of the oldest in the country, dating back to the 14th century, and is usually held in front of the city’s town hall in Marienplatz - it was due to take place from 22 November to 9 January 2022.

The announcement comes after Munich also had to cancel its world-famous Oktoberfest celebrations earlier this year.

Munich’s Mayor has said that he made the decision to cancel the market after meeting with pandemic officers from the city’s hospitals who “unanimously warned” against holding it.

Mayor Dieter Reiter said that it was “bitter news” for residents and stallholders, “However, the extreme situation in our hospitals and exponentially rising infection rates leave me no other choice.”

“The Chistkindlmarkt would, of course, have been a nice pre-Christmas sign of normality. Unfortunately, despite the possibility of vaccinations, we are currently far from this normality, partly because not enough people have been vaccinated yet,” he added.

In mid-October Berlin's Berlin’s Charlottenburg Palace Christmas market made the decision not to go ahead for the 2021/22 season but Munich was the first German city to announce that its Christmas market has been cancelled since COVID-19 cases started to rise in the country.

On Friday, the German states of Bavaria and Saxony also cancelled all of their Christmas markets. This includes those in the cities of Dresden and Nuremberg.

But some organisers have said that they plan to go ahead with strict rules preventing the unvaccinated from attending and stalls spread out in bigger spaces than previous years. Others will require proof of vaccination, recovery or a negative test before allowing visitors to enter.

So which German Christmas markets are still going ahead and what COVID restrictions are in place to keep them safe?

Before you think about travelling to Germany to visit a Christmas market, here are the current restrictions:

Cologne has a number of Christmas markets both big and small, each with a different theme.

Those in the centre are beautifully decorated selling arts and crafts from all over Europe. In the city quarters - or ‘Veedel’ as they are called in Cologne - smaller markets offer culinary specialities and goods from local businesses. This year they are taking place from the 22nd November through to the 23rd of December.

For access to the city’s Christmas markets, Germany’s 2G rule will be in place. This means that only those vaccinated or those who have recovered from the virus will be allowed to enter. Children up to the age of five are exempt from this rule.

Those between the ages of six and twelve, as well as people who can’t be vaccinated and have an appropriate certificate, will need a negative PCR test or antigen test. Mask wearing will also be recommended and mandatory at some of the city’s markets.

Dating back to 1393, Frankfurt Christmas Market is one of the oldest in Germany. Scheduled to take place from November 15th to December 22 this year, it is spread out around the city's historic cobbled streets. In past years, around 3 million people are estimated to have come to the market during the festive season.

To keep visitors safe, there is no opening ceremony this year and fewer stalls to prevent large crowds. Eating and drinking are only allowed in specific market areas with tables to stand at. While masks must be worn, these measures mean that restrictions at Frankfurt's Christmas market are not as strict as some others.

Only the Pink Christmas Market and the ChristmasRoßmarkt will be under 2G restrictions.

Close to the border where Germany meets Belgium and the Netherlands, Aachen is home to a Christmas market that attracts around 1.5 million visitors a year. This year it is taking place from the 19th November to the 23rd of December.

The market is held in the city centre and overlooked by its Gothic cathedral - a UNESCO World Heritage site. It is also home to the Aachener Printen, a special kind of gingerbread that has been made for 350 years and is specific to the region.

For the entirety of the Aachen market, you must wear a mask except when standing still at a table or edge of a path to eat or drink.

It is also under 2G control which means that you need an official 2G certificate to enter. As with Cologne, this requires visitors to either be vaccinated or to have recovered from the virus. If you are attending the market you must bring proof of immunisation and a photo ID as there may be random checks on the site.