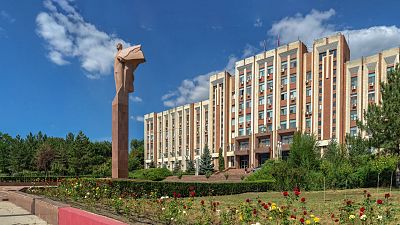 Transnistria’s capital city, Tiraspol, has been in the spotlight recently due to the Champions League success of the city’s football club.

Sheriff Tiraspol has won the Moldovan National Division league 19 times in the past 21 years, and in September this year, the team beat 13-time winners Real Madrid 2-1 in Santiago Bernabéu.

Later this month, the club will welcome Real and Inter Milan to Transnistria, a breakaway state located less than an hour’s drive east of the Moldovan capital, Chisinau.

When is Tiraspol Independence Day?

After the fall of the Soviet Union in the early 1990s, Moldova, which had been part of the Soviet Empire since the end of the Second World War, became an independent country.

Despite this, people based to the east of the Dniestr River, the majority of whom were of Russian and Ukrainian descent, fought for independence from Moldova as they felt more allied to Russia.

On 2 September 1990, the strip of land tracing Moldova’s border with Ukraine declared its independence from Moldova after a brutal civil war between pro-Transnistria forces and pro-Moldovan forces.

Fighting intensified in March 1992 until a ceasefire was declared on 21 July 1992.

However, while the tiny Eastern European nation known formally as the Pridnestrovian Moldavian Republic (PMR) is internationally recognised as part of Moldova, its inhabitants recognise it as Transnistria.

Since then it has aligned itself politically and economically with Moscow. Split more or less into three equal minorities: Ukrainians, Russians, and Moldovans, its “national” language is Russian and road signs are written in Cyrillic. Transnistria also has its own currency, Transnistrian Rubles.

Moldova, however still sees Transnistria as an eastern province and just three other partially recognised states – Abkhazia, Artsakh and South Ossetia – have embassies in Tiraspol.

Russia meanwhile, has a consulate and barracks with around 1,500 peacekeeping troops guarding the border between the two opposing sides.

Back to the USSR

Visitors to Transnistria will soon discover its commitment to all things Soviet. The breakaway state is home to busts of Soviet military figures, a monument featuring a Mig-19 fighter jet, socialist-realist murals and boulevards dedicated to Lenin and Marx.

It's worth visiting on 2 September for the Independence Day celebrations, so you can see the Transnistria Cossack battalions parade through the city centre.

Other festivities taking place alongside the main event include a street food festival, which features traditional food from local farms.

Here you can try fresh lamb and pork shashlik (kebab), and bread with the Soviet hammer and sickle baked into it.

Where can I try brandy and caviar in Transnistria?

There are some modern sights to see in Transnistria though, such as the state-of-the art Sheriff stadium and sports complex, which includes four arenas, eight full-size training fields, a children’s football academy and the FC Sheriff football players’ complex.

You can also take a tour of the Aquatir complex, one of the largest sturgeon breeding facilities and black caviar-processing industrial parks in Europe. Or discover how cognac is made at the legendary Kvint Brandy Factory.

The factory has produced its award-winning Kvint brandy for over 120 years, as well as vodka, gin and wines.

The lively Zeleni Green market has been a landmark of the city for over 220 years. Here you will find fresh fruit and vegetables, meat, fish, dairy products and clothes at cheap prices.

Visit the Nativity of Christ Cathedral

Next to the market, you'll find the most important cathedral in Tiraspol, the Nativity of Christ Cathedral - or Christmas Cathedral - built between 1998 and 2000. The cathedral is painted in Byzantine style, with colourful domes, arched walls and rich stained-glass windows.

The House of Soviets is one of the most recognisable buildings in Tiraspol, and is now home to the city council. In front of the building is a huge bust of Lenin, surrounded by photographs of the most memorable figures of the PMR.

Also worth a visit is the Presidential Palace in the historic city centre, which houses an impressive Lenin statue.

What historical sites can I visit in Tiraspol?

In the heart of Tiraspol is Suvorov Square, which was called the Square of Stalin Constitution in Soviet times.

Here you'll find many monuments, including the statue of Alexander Suvorov, the last Generalissimo of the Russian Empire in the 17th century.

The square is next to Catherine Park, named after the Russian empress who signed the decree to found Tiraspol.

Where is Bendery Fortress?

Not far from Tiraspol is the Bendery fortress and tank monument. The town of Bendery was the site of the worst fighting in the 1992 war.

The central square has a museum dedicated to the "tragedy at Bendery" and in Madagascar Park you'll find another statue of Lenin.