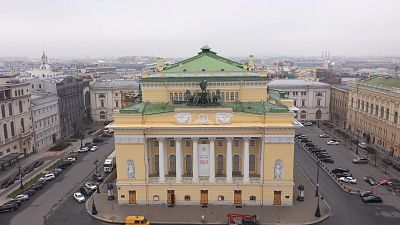 Late Autumn in Saint Petersburg is when time seems to slow down. The city is an inviting place for cozy walks and you get the museums all to yourself.

A history of locomotives

There are many new destinations to explore as well, like the Russian Railway Museum. This train dedicated complex, which opened in 2017, is one of the world's largest railway museums. It is home to a collection of steam locomotives built during the Tsarist period, as well as luxurious Soviet-era carriages. Its collection is truly vast.

The first public Russian railway was launched in Saint Petersburg in 1837, so the museum has a special place in the city.

The cultural capital of Russia

Saint Petersburg is often called the cultural capital of Russia. This is partly due to the number of theatres in the city. There are more than 100 and autumn is especially rich in premieres and performances.

Arkady Sharogradsky is a Russian theatre and film actor. He says that everyone knows about Saint Petersburg's White Nights, a phenomenon where the city never reaches complete darkness at night during summer due to its geographical location. However, he explains that the city's skies being lit up by its cultural scene is less known.

In late autumn, the city's theatrical performances get into full swing with world-famous drama, ballet and opera for all to enjoy. It is the time of year that Sharogradsky says shows "the very atmosphere that gives Saint Petersburg the name of Cultural Capital of Russia."

One of the iconic theatres that comes to life during this special time is the Aleksandrinsky. Designed by architect Carlo Rossi and opened in 1832, it has become one of the symbols of the city. It gets its name from the wife of Emperor Nicholas I, Alexandra Feodorovna.

The theatre's story is impressive. It is generally considered Russia's oldest national theatre. The likes of A. Griboyedov, A. Ostrovsky, A. Chekhov and nearly all of the important plays by the most famous Russian classical writers premiered there. They were all enjoyed and scrutinised by past emperors who had their own magnificent royal box to view them from.

The theatre is also home to various ancient and unique collections that include scenery, costumes, furniture and props.

Saint Petersburg knows how to please its guests. It's a city with a unique atmosphere for every season.

Travelling to Moscow? These are must-visit spots for a Autumn holiday

Autumn in Saint Petersburg, a time to take in the diverse urban culture

An oasis among the dunes: Dubai's desert lakes

Saint Petersburg in summer: magic and inspiration for travellers