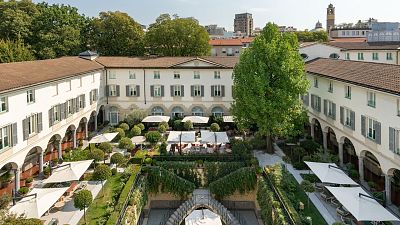 After working from home for so long, there are some things that we’ve all forgotten how to do. My most recent slip-up was forgetting to polish my boots before packing them for a conference. So thank God for the concierge at the Four Seasons Milan, where I was staying during my first in-person conference in two years.

With just one call to Reception, my tired-looking shoes were picked up from my room and returned fifteen minutes later looking brand new.

I got the feeling I could have asked for virtually any request and it would have been sorted out in minutes.

The Four Seasons Milan, like the most interesting people, has lived many lives. It was born in the 15th century as the convent of Santa Maria del Gesù and still sits on Via Gesù. Since then it has been the home of one of the city’s most important families (I’m yet to find out who - get in touch if you know). Then, during World War Two, it was the headquarters of General Radetzky during the Austrian occupation.

You can feel how many illustrious people have walked the corridors and strolled in the gorgeous courtyard at the centre of the complex. Four Seasons took over in 1987 and it was only during their six-year restoration that the cloister of the convent was discovered.

Prior to this, it was thought that the building had always been a palace.

Original features have been thoughtfully retained, such as frescoes and exposed brickwork. Eighteenth century stone carvings and stucco ceilings also remain from the former ‘palazzo.’

All of this adds up to opulent but welcoming surroundings. You can feel the history of the building, but the interiors, added in the recent renovation, are modern and comfortable.

We were in a Premium Room which, as the website notes, is all "rich Fortuny fabrics, custom wood fixtures and opulent marble". I always worry that I’m not going to be able to relax in luxury hotels for fear of spilling red wine on a carpet that costs more than my car.

But it was quite the opposite here.

I sunk right into the deep sofa and had a great night’s sleep in the plush bed. The room had everything you might have forgotten to pack. Or, like me, couldn’t fit into your budget airline luggage. Umbrellas, slippers, fluffy dressing gowns and gorgeous Acqua di Parma toiletries.

There were also lots of little surprises. When I opened the shower cap box, there were two sparkly hair ties inside. Like the best gifts, I didn’t know I needed them until I had them.

We had dinner out so I can’t comment on the evening meals but I’m sure that, like breakfast, they are impeccable. We were given an extensive menu to order our morning meal from but, naturally, you’re welcome to make specific requests.

I’m gluten-free and when I asked the waiter if they happened to have any gluten-free pastries, he simply said, “Of course, madam.” Ten minutes later, muffins fresh out of the oven arrived at the table. Gluten-free baked goods aren’t famed for being the best in the world, but these were some of the best I’ve ever tried.

You also get your tea in a proper mug rather than a piddly coffee cup. This should be standard at every hotel, of course. But, as an Englishwoman, it was especially appreciated.

Is the hotel in a good location?

Milan is a really walkable city so be sure to pack a pair of comfortable shoes and be prepared to smash your step count.

All the tourist attractions you’ll have on your list are walking distance, or a short drive, from the Four Seasons.

It’s located in the Fashion District which is pretty much in the middle of the city. Not that you’d know it. Once you’re inside the hotel, you feel cocooned in a quiet nest of comfort and luxury.

If you’re in the city to shop, the Four Seasons is the right place to lay your head after a busy day of purchasing. It’s just off Via Monte Napoleone which is home to all the big designer brands, earning it the crown of Europe’s third-most expensive street.

Il Duomo, the third-biggest cathedral in the world, deserves a place on every tourist’s itinerary.

Even Milan residents who’ve been a hundred times keep going back. It’s only a ten-minute walk from the Four Seasons and you can easily spend a day wandering around the area surrounding it, too. Definitely don’t miss out on Castello Sforzesco. It’s the former residence of illustrious families and home to three great museums.

5* hotels are, of course, not the budget option. But this one feels worth the money.

Guests at Four Seasons hotels are paying to know that whatever they need, at any hour of the day, staff will be happy to help. With each shoe brought back its own bag, if they’re lucky.

Double rooms start from €850 and can be booked here.

This Sri Lankan sanctuary hotel is a haven for wildlife lovers

Rome at Christmas: An insider’s guide to December in the Eternal City

UK holidays: Here are 7 cosy cabins for an autumn getaway

Where is this magical 'treehouse' and why is it so popular on Airbnb?

Take a peek inside the world's weirdest AirBnbs

I couldn't help but wonder, can I stay in Carrie Bradshaw's apartment?

Here's why St Petersburg is a top destination for football fans