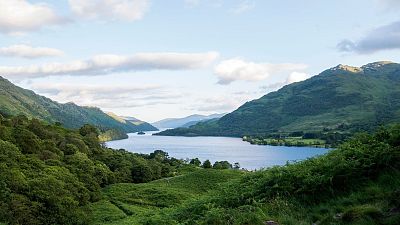 Recently, temperatures in the UK’s most northerly country have reached a balmy 28 degrees Celsius. Tourists have been flocking to Scotland - especially since the country recently moved its coronavirus restrictions to level 0.

Scotland is a country with a rich cultural heritage and some stunning cities like Edinburgh and Glasgow. However, the biggest summer attraction has got to be its great outdoors - and in particular, its world famous lochs. In the summer, a dip in the crystal-clear freshwater or a sunny hike along the surrounding mountains is nothing short of bliss.

The breathtaking scenery surrounding Scotland’s lochs is a hit with foreign visitors and locals tourists alike. Every year, thousands flock to Loch Ness hoping to spot the famous monster, or Loch Lomond - the gateway to the Highlands.

If pandemic caution has you keen to avoid these busier sites, don’t worry. There are over 30,000 lochs in and around Scotland, with plenty of crowd-free locations to choose from that are off the beaten track.

Instagram and TikTok have recently collaborated to reveal exactly where these hidden gems are. Macklin Motors have used data from both social media platforms to find the lochs in mainland Scotland with the fewest people visiting (that is, tagging photos and making TikTok videos during their visit).

Here are some of Scotland’s ‘secret lochs’, based on which locations had the fewest photo tags and views on Instagram and TikTok.

Straddling the border of Perth and Kinross and the Highlands, Loch Ericht is the tenth largest freshwater lake in Scotland. Aside from being a hill walker's paradise, it gets extra points for being eco-friendly as it’s part of a hydro-electric scheme. You’ll be able to spot dams at each end of its freshwater shores.

There’s a beautiful native Caledonian pinewood forest lining the shores of loch Arkaig, and it’s actually one of the last remaining with that species of tree. Legend pins the home of the mythical ‘water horse’ to this Loch, but for some less-elusive wildlife spotting, bring your binoculars. If you’re lucky, you might catch Louis and Aila, the lochs resident Ospreys soaring overhead.

This lock is officially Scotland's best kept secret according to the social media snaps. It has just 771 photo tags on Instagram, and fewer than 50 views on TikTok. It’s a prime location to take your hiking boots, or even cycle to, without passing another soul on the journey.

Loch Ossain is pretty inaccessible by road, so you’ll have to board a train to the remote Corrour railway station if you want to witness it’s isolated beauty. There are small sandy beaches that make it the perfect spot to whip out a picnic blanket and cloud watch the day away.

You’ve probably heard of Loch Lomond, but we doubt you’ve come across it’s lesser-known, much smaller cousin, Loch Rusky. It truly is hidden in plain sight, right on the edge of Loch Lomond, but it’s only really been discovered by landscape photographers.

Ditch the Lomond crowds and head to the smaller, quieter and more peaceful Loch Rusky.

This loch is uniquely located at the confluence of the Awe, Maol a' Choire, and Leitir Easaich lochs on one side and the sea on the other. This means it receives overflow from the three lochs while discharging into the open water. Aside from its striking geography, it’s home to trout, sea-trout and salmon, so keen fishermen should bring their rods.

Every stretch of freshwater has its own unique character, and those are just some of the highlights. With hundreds more crowd-free watering holes to explore, which secret loch would you like to uncover?

Staying safe in the water

It’s easy to underestimate the temperature, depth and current of wild water. Here’s a few pointers to keep yourself and others safe.

The rise of ‘slow travel’: What is it and who is it for?

The best places for beginners to learn to surf