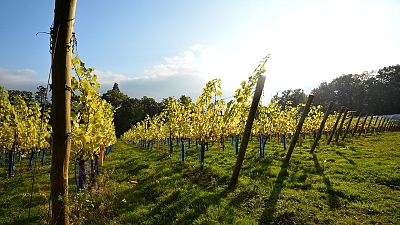 France may be the first country that comes to mind when thinking about wine, with its dry whites from the Loire Valley and deep reds from Bordeaux. But, just across the pond, there is a plethora of British vineyards that are producing plucky wines.

Though Britain has a cooler climate than France, the new “terroirs” are especially suited for white and sparkling wines, as red wines usually require a warmer temperature. Whites and sparkling wines also need sustained acidity and grapes with low sugar levels, which can be produced in colder regions.

Here are five of the top vineyards in Britain.

For a crisp and refreshing sparkling white wine head down to England’s south. Winemaker Peter Hall planted his vineyard in 1974 in a secluded fold of the Sussex Downs. He picked the area because he saw the potential offered by a climate similar to that of Champagne and the Loire.

Hall grew up with French flavours as he had a French/Italian mother and his French grandfather was a top restaurateur in Soho.

The land is just six acres of vines in the South Downs National Park and roughly two miles from the English Channel.

Hall says typically he produces 10,000 bottles annually but admits that there are some years where flooding and even pheasants have killed off an entire crop.

This English gem is also located in the South Downs in West Sussex. The 640-acre estate Nyetimber can be traced back to the Domesday Book. The previous owners planted the first vines more than 30 years ago. Current owner Eric Heerma hired winemakers in 2006 to produce elegant and award-winning sparkling wines.

The head winemaker, Cherie Spriggs, won the International Wine Challenge in 2018. It was the first time the award was won by a woman and by a winemaker outside the Champagne region.

Welsh wines also deserve a mention and are often seen as the UK’s best-kept secret. Wales is also seeing a boom in vineyards and there are about 30 of them.

One of the top vineyards in the region is Llanerch. Located in the Vale of Glamorgan, near Cardiff, the vineyard has been producing award-winning wines since 1986.

The vineyard offers tours and has five wines in total. A sparkling Brut, sparkling Blush, a slightly sweet Rosé, a dry white and an off-dry white.

There is plenty of variety to choose from and you can book a tour of the vineyard to sample them all.

If red wine is more to your fancy, look no further than the Bolney vineyard. It produces a fragrant and light Pinot Noir and also a sparkling red Cuvee Noir. It also serves up a crisp chardonnay.

The winery was established in 1972 and is one of the oldest in England. Bolney started with the white grape but now has nine variations of red and white grapes.

The vineyard claims it has the perfect soil, which is mostly Upper Tunbridge Wells Sand, which allowing for good heat retention, a necessity for red wines.

Located in England’s sunny southwest, Camel Valley has been producing award-winning wines since 1989. The vineyard sits on the sun-drenched slopes near the Camel River, which grow the perfect grape that suits the soil climate.

The wine is not only popular in England but is also exported to Japan.

The vineyard is famed for its ‘Cornwall’ Brut and Pinot Noir Rosé Brut but also produces white and Rosé.

As a guest, you can take a tour of the vineyard or simply enjoy a glass or two on their picturesque terrace.

What is oenotourism and which European country specialises in it?