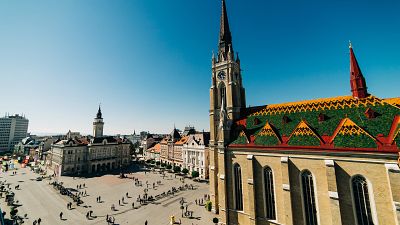 In a city where disused factories have become buzzing art venues, a historic fortress doubles as a music festival site and vivid street art brightens up the most unexpected neighbourhood corners, it’s almost too easy to immerse yourself in Novi Sad’s cultural scene.

Serbia’s second city has been named as a European Capital of Culture 2022 (it was postponed for a year due to the coronavirus pandemic), and to celebrate is pulling out all the stops with a packed programme of exhibitions, events and performances. Make the most of a weekend break by taking in as many of these cultural highlights as you can.

A series of new arts and performance spaces have opened across Novi Sad as part of the European Capital of Culture programme, each with its own character and agenda. As many are based in beautifully restored heritage buildings, visiting these Cultural Stations is a fantastic way to get a glimpse into Novi Sad’s past as well as a dose of its contemporary culture.

Petrovaradin Fortress and more: exploring the city’s past

Novi Sad’s history is in evidence all over the city. Stroll through the Old Town’s Liberty Square to admire the architecture of the City Hall and the Name of Mary Catholic Church, plus a host of other heritage buildings. Or for a deeper dive into the city’s past, take an outing to one of these historical highlights.

Petrovaradin Fortress: The city’s beloved citadel has kept its place at the heart of Novi Sad’s action for centuries. Its history as a military stronghold, complete with dungeons, treasure troves and 16km of (still tour-able) underground tunnels, has given way to its modern-day use as the home to Serbia’s famous annual music festival Exit.

Sitting on the right bank of the Danube, Petrovaradin is considered one of Europe’s best-preserved fortresses. There’s plenty to see here in addition to the building itself; the onsite City Museum of Novi Sad, the Fight of Deer sculpture, the quirky ‘drunken clock’ with its back-to-front hands and if you take that underground tunnel tour, possibly even the fortress’ resident ghosts…

The Museum of Vojvodina

The region’s history from the Palaeolithic period to the 20th century is documented at this museum and there are some fascinating archaeological finds on display. Tools, jewellery, pottery and coins offer a glimpse into everyday life, burial customs and religious culture in ancient Vojvodina settlements. There are also impressive military artefacts to be found here – don’t miss the pair of fabulous Roman helmets, gold-plated and jewel-studded, which were excavated in 1955 alongside other pieces of a Roman cavalry officer’s equipment.

From galleries to the streets: a deep dive into Serbian art

Visitors keen to delve into Serbian art are spoiled for choice in Novi Sad, with longstanding cultural institutions as well as modern creative spaces showcasing the best of local talent.

Street Art: It’s hard to miss Novi Sad’s vibrant urban art scene, as massive murals and creative graffiti can be spotted on walls around the city centre and beyond. You can find locations of the latest artworks on the Novi Sad Street Art Instagram page.

While there’s plenty to do in Novi Sad all year round, it’s also worth considering a trip especially for one of the city’s many festivals. As mentioned above, mega music fest Exit is the city’s big summer hitter and is celebrating its 20th anniversary this year. There’s an international lineup of dance, rock and alternative acts playing over four days on multiple stages in the grounds of the Petrovaradin Fortress. Festival-goers can choose to camp on Štrand beach or bed down in one of the well-priced hostels in town.

Also on the calendar is the lively Gradić Fest, a street musicians’ festival of outdoor performances held each year at the end of August. For theatre lovers, there’s spring’s Sterijino Pozorje festival which showcases regional drama productions.

The best spots in Europe for a summer ski holiday

Where is best to live and work for LGBTQ+ digital nomads?

Camping in Lithuania: A showcase of natural beauty