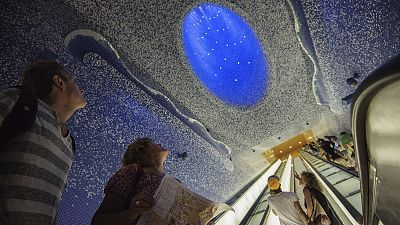 For city dwellers, underground rail networks are just a cog in the daily grind, a means of getting quickly from A to B. But for visitors exploring a new city for the first time, metro stations can be tourist attractions in themselves.

Here's our pick of Europe's most beautiful and interesting metro systems you should explore on your next city break.

The Munich subway is fairly unremarkable on first inspection - that is until you travel the furthest you can go from the city centre. Hidden away at the northern and southern ends of the U1 line are stations boasting an eclectic mixture of décor styles and design; from waves of bright colours at Candidplatz and Georg-Brauchle-Ring to the moody, cavernous Westfriedhof station with its domed lights and exposed rock walls bathed in blue light.

As well as boasting the world's deepest underground station - over 100 metres below street level - Kyiv's Soviet-era metro system is also a visual treat. One station in particular not to be missed is Zoloti Vorota (the "Golden Gate") which is designed to look like a castle.

Consistently voted one of the world's most beautiful stations, its walls are adorned with intricate mosaics depicting ancient regional rulers, Kyiv's founders, and the city's patron saints. Make a beeline for Osokorki station, too, which is home to eight gargantuan murals painted by street artists from around the globe.

Construction work on the St Petersburg metro first began in 1941 but was soon brought to a halt by the Nazi invasion of the Soviet Union. Some of the subterranean complexes that had already been built thus became air-raid shelters for the city's besieged citizens and would not see passengers until 1955.

While Kyiv boasts the deepest station, the entire St Petersburg metro is one world's deepest subway systems. It is also one of the most opulently decorated with high-ceilinged stations decked out in marble, artworks, and chandeliers.

Mirroring the colour and vibrancy of the streets overhead, Lisbon's metro is arguably the city's largest art gallery. With more than 50 stations on its network, their walls have provided a canvas for artists, designers and architects to reflect the history and culture of Portugal as well as the influences of the local districts they serve on the surface above them.

As with many buildings throughout the city, some stations are embellished with beautiful azulejo tiles - traditional ceramics that have been associated with the country for centuries - while others, like Olaias, make you feel like you're being jumbled around in a giant kaleidoscope.

Being the oldest underground railway in the world at over 150 years old, the Tube has been the blueprint from which every other city with a metro system has worked from. Despite its age, the labyrinth of lines and stations underneath London has been well-maintained and renovated over the decades but there are still glimpses of earlier design influences, like Art Deco, for instance.

Newer stations, while boasting more modernist designs, have also seen famous artists lend their talents to the décor as Eduardo Paolozzi did with his spectacular mosaic murals at Tottenham Court Road station. The 90-metre LED "art wall" at King's Cross is continuing this legacy.

Snaking beneath the city in an ever-expanding circle, the Naples metro is still very much evolving. It has become something of a symbol of the city's renaissance from shabby coastal port to thriving tourist hotspot. Part of its success has been the launch of the "Stations of Art" project which gave scores of contemporary artists free rein over metro stations' design.

More than 180 works by 90 Italian and international artists are the focal points in stations across the city. Regularly voted Europe's most beautiful underground station, Toledo is now a tourist attraction in its own right.

The design of Berlin's U-Bahn stations is as chequered as the city's history. Cross-city travel ground to a halt during the Cold War, leaving many stations much as they had been since the underground was opened in the early 1900s. Wes Anderson-esque Alexanderplatz, for example, still retains its duck egg blue tiles from the 1920s.

Others changed radically after damage caused during the Second World War. Riding the rails beneath the city, you'll encounter various styles, ranging from Art Nouveau to Brutalist. Following the fall of the Berlin Wall, the system was reconnected but has largely remained blissfully trapped in a bygone era.

The Polish capital's underground system was nearly 80 years in the making, finally seeing the light of day only after the collapse of communism. With its first stations opening in 1995, the Warsaw metro has grown to be one of the most efficient, well-used networks in Europe.

Given its age, much of its design is futuristic in comparison to many of the older metro systems on the continent. Walking along the platforms at Plac Wilsona and Nowy Świat-Uniwersytet stations, for instance, leaves you feeling like you're on a city break on another world.

A sense of romance and nostalgia will forever exude from the tilework of the Paris metro's many stations. Such is the significance of the railway beneath the City of Lights that it has heavily influenced popular culture, featuring in acclaimed films such as Amélie. With their iconic Art Nouveau entrances, tiled nameplates and poster frames, stations on the Paris metro are instantly recognisable.

There are those that stand out for being different, including Concorde, whose tiles spell out the text of the revolution-era Declaration of the Rights of Man and of the Citizen, while Arts et Métiers station is clad in copper to resemble the inside of a submarine.

Of all the Soviet-era metro systems, Moscow is hands down the most impressive in terms of both scale and aesthetics. As one of the USSR's most ambitious construction projects, it became a showpiece for the ideals of the Stalinist regime when it opened in 1935.

As well as interiors, which are often compared to palaces, museums, or ballrooms, many of the stations feature frescoes and reliefs depicting life in the Soviet Union designed to instill communist values in the travelling public. The current system has over 200 stations and is Europe's busiest underground rail network.

Often dubbed the world's longest art gallery, Stockholm's metro stations stand out not only because of their unusual exposed bedrock ceilings and walls, but also because they form part of over 100 miles of artwork. Nearly all of the network's stations - each as breathtaking as the next - are festooned with paintings, sculptures, mosaics, murals, installations and engravings created by over a hundred different artists.

Miss flying? British Airways has you covered with its new meal kits