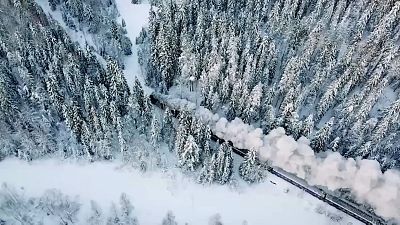 The Ruskeala Express, with its billowing smoke, is a traditional steam-powered locomotive which can still be found along the tracks of Russia’s railways. It has recently been refitted in the style of classic 20th Century trains, to give travellers a nostalgic experience as they sweep through the woodlands of the northern Karelia republic.

The train runs from the town of Sortavala to the Ruskeala Mountain Park, passing gorgeous Karelian scenery, with snowy fir trees in winter and beautiful still lakes in the summer.

Inside, the German-made carriages have been refitted with interiors inspired by the early 20th Century, including old lampshades, curtains, and carpets.

"It was the curtains on the windows, with those lovely tassels, that created the first impression that this is a retro car," says train car passenger Mrs. Gavrilova. "And the carpeted passage. It's really wonderful.”

Passengers can sit back and relax in the train's restaurant car, enjoying a coffee and a pastry as they go. But this serene vision is a very different story to what’s happening up at the front of the train.

The train is pulled by a 1953 Soviet-era locomotive, powered by coal. The system requires a train driver and two assistants, who are in charge of the firebox. It’s a constant battle to keep the furnace roaring.

"It's all about physical labour. If you forget something somewhere, it's over, you'll have to shovel (coal) for the rest of the trip until you're half-dead," says Sergei, a train driver's assistant.

The retro train first began running in June 2019 and has already carried around 130,000 passengers from across the world.

The train ticket costs around 450 rubles or around five euros.

Although passenger numbers hit a bump during the coronavirus pandemic, railway officials say the route remains popular and is nearly always full.

Watch the video above for more.