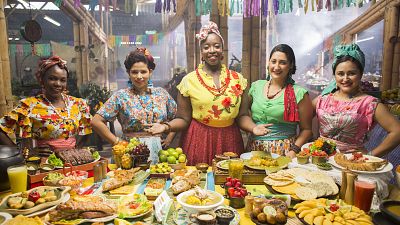 Colombian culture revolves around a year packed with big celebrations and New Year's Eve is no exception   -   Copyright  ProColombia
By Laura Sanders  •  Updated: 07/01/2021

Colombian culture revolves around a calendar packed with celebrations. In fact, this lively Latin American country racks up some 20 days of national public holidays every year - and New Year’s Eve is no exception.

This particular holiday is shrouded in traditional superstitions that ensure a prosperous year ahead. Here’s how Colombia prepares.

Cleaning the house on 31 December

Many of us like to start the New Year with a clean and tidy home - though of course, many of us don’t thanks to late night celebrations seeing in the New Year.

In Colombia, cleaning is a ritual that’s taken particularly seriously. The idea is that any negative energies and bad memories are swept out of the house before midnight, ensuring that there’s plenty of space for love and positivity.

Bathing in the river

Ridding any bad energy doesn’t stop at the house.

One special tradition for those living in the Valle del Cauca region and the city of Cali sees locals heading to the Pance River in the early morning of New Year’s Eve.

Locals bathe in the river to wash away any negative energy that may be lurking within.

Colombians wear a new set of bright yellow underwear to welcome in the New Year. It’s a tradition believed to bring a year full of love and happiness.

Every New Year’s Eve outfit in Columbia must be equipped with big pockets. Why? To stuff with lentils.

The tradition is thought to bring a successful New Year.

Fortunately, these can be dried lentils.

Holding on to some cash

Keeping cash in your pocket on New Year’s Eve is thought to secure a year full of prosperity and financial stability.

We like the sound of this one:Colombian locals might be spotted carrying a suitcase around with them as they run errands on the 31 December.

This is thought to promise a year full of travel and adventures. And after we’ve all spent most of 2020 grounded, the superstition is likely to be a popular one this year.

Wheat on the table

Most Colombians spend New Year’s Eve at family dinners and get-togethers as opposed to heading out to clubs and bars, so there is always a table to be decorated.

12 shafts of wheat are sprinkled on the tables, as this is thought to promise a bountiful year with plenty to eat.

The ‘Old Year’ doll is a life-sized doll which represents the past year and everything you want to leave behind. We can all think of plenty from 2020!

The doll is stuffed with fireworks and set on fire at the stroke of midnight, exploding into bright colours and welcoming in a New Year.

As the clock strikes midnight on 1 January, it’s tradition to eat a grape and make a wish for each chime of the clock.

12 grapes in as many seconds is no easy task, so careful chewing is advised.

After the clock has struck midnight, it’s important that the first step you take is with your right foot to guarantee a year filled with good decisions and risks that pay off.

The more mischievous locals may be spotted trying to tactically tip others onto their left foot.

Which is your favourite Colombian New Year’s tradition? Tag us on Twitter @euronewstravel.

Christmas traditions around the world

Travel the world from your sofa with this random location generator

Glampervans and the death of mini-breaks: All the 2021 travel trends