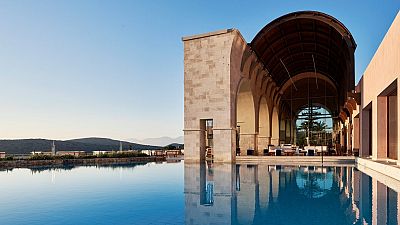 A rustic sign reads "boats for Spinalonga" in white and blue hand-painted letters. The ‘when’ and ‘how much’ are not specified. I come closer to the boat shed to enquire. From what I can see, three Greek men, several generations apart, are deep in animated conversation I can't grasp a word of. I stand awkwardly like the tourist that I am, "When is the boat for Spinalonga please?"

The middle-aged man turns to me halfway into hearing a joke and, just suppressing a burst of laughter, says "in 30 to 40 minutes". I have clearly arrived off season and the port is deserted. I glance around and wonder why I should have to wait that long to reach an island that is less than 5 minutes away when there's no one else waiting. My face must have given away my frustration because he quickly adds, "no stress Madam", with an enigmatic smile before returning to his conversation.

I instantly relax, slightly embarrassed. This is a place where timetables and self-inflicted anxiety are not allowed, especially once the high season has finished. We are in late October and Plaka, on the northeastern coast of Crete in Greece, has just returned to normal - a fishing village known for its slow and contented lifestyle. I had no choice but to adapt.

Spinalonga Greek National Monument in the Gulf of Elounda

The boat ends up leaving around 10 minutes later, with me and a few locals on board. While this may not have been what I was expecting, I liked the local, community feel of the journey. I had seen Spinalonga from a distance, but that was nothing compared to an actual trip to this speck of rock a couple hundred meters from the coast. I had entered the gulf of Elounda and, having chosen to visit in the early morning, certainly didn't regret my choice as I crossed paths with a group of elderly tourists on my way back. Slightly less serene. Another reason to go before 11am is the lack of shade in the afternoon. Walking up and down the open-air ruins turned what I thought would be a relatively mild hike into a full on cardio session under the scorching sun.

Spinalonga is home to a combination of Medieval Venetian and Turkish ruins - including a fortress, several shops - and turn of the century Greek houses left derelict. In 1903, the Cretan State decreed the island should be turned into a refuge for those suffering from leprosy, where a community lived a seemingly normal life until 1953. It’s now uninhabited and open for visitation from as little as €8. As such, the atmosphere of Spinalonga is characterised by its recent history - imagining that a group of unwell people once lived there, in total seclusion, sounded claustrophobic to me. At the very least, they had the magical view over the bay and surrounding Katselios mountains to soothe their pain and loneliness. This sight must have been the little happiness they found in sorrow.

Staying at Blue Palace resort and spa on Elounda bay

Today, Spinalonga has another function. Besides being a Unesco protected tourist hotspot, it is also intrinsically connected to Blue Palace resort and spa, located on the opposite shore. Every terrace, window, and table at the resort is positioned perfectly for you to enjoy a direct view of the island. Guests comment on the view at least once a day, many stopping and staring and pausing to take selfies.

Blue Palace is built on a hill over three floors, reachable only via a quirky yet super chic cable car. The glass-walled, panoramic pod, goes up and down the slope at a pace slow enough to both admire the sea view and peek at guests enjoying a dip in their own private infinity pool (70% of the 251 rooms come with this luxury feature).

On the ground floor, you’ll find the pebble beach, Haven lounge bar and Isola beach club, a salt water outdoor swimming pool and the Elounda spa complex including an indoor heated pool, alongside saunas and a hammam (not mixed) and fitness facilities. Quite a mouthful! The spa menu is endless with every type of treatment conceivable, from thalassotherapy and eleven different types of facials to Indian massages, to mention a few. I went for a deep-tissue Swedish massage with stretching movements. I would definitely recommend it, but it's not for the faint hearted. You'll be sent into a realm of pleasurable pain by your therapist.

The Isola beach club has a more bohemian vibe. Think clay lanterns hanging from a canopy, olive trees all around and a structure in the shape of a mitato - a traditional shepard’s house. Then there’s the Haven, reserved exclusively for the Island Luxury Suites and Private Villas, which is equipped with loungers and parasols that come with personalised baskets of complimentary goodies like organic sunscreen and lifestyle magazines. From there, you can jump on board a traditional wooden ‘caique’ and enjoy a private cruise including local wine and cheese tasting.

Relaxation and a free state of mind is of utmost importance here. Every sign of impatience is met with a gentle smile and a positive attitude that makes the whole experience very soothing. If you're looking for pretentious luxury, you have come to the wrong place. This 5-star resort’s atmosphere is both laid back and prides itself on being completely authentic, interconnected to its Cretan roots.

"Our food here is not Michelin star, it is simple ingredients and techniques," explains the Chef, Kostas Charmousizis, as he sets the table for our private one-on-one Cretan cuisine cooking class. For the next hour, I learnt the secrets behind the best Greek salad (there's a trick to it), discovered how to wipe the most unctuous of Tzatzikis, learnt about Dakos and folded wine leaves to make Dolmadaki (a personal favourite) all whilst sipping Raki (grape spirit). You can book this class for yourself or merely sample the final product at the Blue Door Taverna restaurant.

Hidden at the end of the beach, behind a straw wall, Blue Door Taverna is your typical Greek restaurant in what used to be a fisherman’s stone house. The bright blue decor and terrace overlooking the Cretan sea could double as a film set. On the menu, all the classics can be found: oven baked sardines, traditional cheese pie with honey, aubergine Moussaka and more. It's unfussy, fills you up and straight to the point. You'll get exactly what you came all this way for, fresh seafood made with coveted family recipes that taste like a Greek summer.

On the opposite end of the spectrum, Anthòs, another of Blue Palace’s restaurants, occupies the whole intermediate floor and is located in front of an organic outdoor herb garden with sweeping sea views. It was an imaginative, highly surprising gastronomic experience where every dish is sustainably sourced and served on impeccably white tablecloths. Although the menu offers a lot of details, you'll be amazed by what comes from chef Athinagoras Kostakos’s kitchen onto your plate - both in presentation and in taste. During high season, you can even watch the entire cooking team in their open-air kitchen as they prepare your feast.

For dinner, I indulged in poached eggs on a crumbly fennel biscuit, all on a white truffle creamy base, nestled in a volcano-shaped plate. Both the flavour combination and the textures were divine and definitely unexpected. As a main, I chose the lobster pasta – but simply calling it that doesn’t give it justice. The dish was fragrant and creative with complex flavours, truly an original recipe. The showstopper was definitely the half-baked carob and chocolate 'cookie' with olive oil ice cream and salt. This was designed for those with a sweet tooth, particularly fans of chocolate and decadent, rich, desserts. Make sure to keep room for it at the end of this culinary journey.

The Cretan diet and way of life with a luxury twist

Blue Palace retains a ‘boutique’ atmosphere despite its size (6 restaurants, 5 pools, tennis courts). I put that down to the magnificent architecture of its entrance hall and Arsenali Lounge bar, with its soaring 10 meter-high vaulted arches - a faithful replica of a 13th century Venetian shipyard in Heraklion town. The fact that the space is mainly composed of low buildings made with local stone, that blends perfectly with the mountainous landscape, could be another explanation. The interiors boast every shade of blue set against cream backdrops, timber shutters, mosaics and rock walls. Both eastern and western influences are clear in the design, brought in by ancient invaders – the Arabs, Ottomans and Venetians.

The ‘Island luxury sea view suite’ is as opulent as its name implies. We’re talking two terraces with views over Spinalonga, a 30m heated swimming pool completely hidden from view (100% fit for a celebrity), a spacious lounge area and double marble bathrooms with a waterfall shower and jacuzzi-style bath. These premium suites also come with full-sized natural organic beauty products to enjoy at leisure.

Being the sustainability-led publication that we are, I couldn’t overlook the resort’s eco credentials as mere details. The hotel’s recycling scheme is quite thorough, as is its policy on restricting water and guest’s electricity usage. However, you will find single-use plastic both at the bar and inside bedrooms in the form of plastic water bottles. It’s good to know that you can absolutely drink from the tap so don’t be led to think otherwise. All the restaurants though use glass water bottles.

The resort is operated with a commitment to the certifications of ISO14001, ISO9001, Travelife and HACCP. They also support local employment, with the staff being mostly of Greek origin, either from Crete or the mainland. Most of the staff return to their olive or wine-growing plantations once the season ends. It is evident that Blue Palace offers a source of income for the local population both living in the village and working at Spinalonga.

When it comes to food, a proportion of dishes in the restaurants use handpicked organic, fresh vegetables from the resort’s own garden (although most of it comes from Ierapetra’s massive greenhouses which makes sense given the size of the resort). Seasonal, local produce is available in the Blue Palace shop to sample. Design and architecture also appear to be as green as can be, using locally-sourced materials and with a great respect for the surrounding natural landscape.

What is there to do here? Plaka fishing village is a 5-minute walk, the Palace of Knossos and Heraklion port with regular connections to other islands are 1h drive away. You can access Spinalonga via the hotel’s speed boat (€35) or be left at a Cretan’s will for only €10.

When to go? Between April and October.