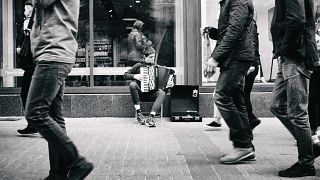 Born and raised in Russia, Anton Kalashnikov is this month's featured lens.

His love for photography started at an early age and his passion has spawned a sophisticated collection of ordinary, but fantastic black and white photographs.

They say art is always influenced by art that came before it. In Kalashnikov's lens, his Russian legacy has played a big part.

Unique as they are, his pictures bring a pleasant and nostalgic air, hearkening us back to the Soviet era. But along the nostalgic breeze, there is a conceptual contrast: Kalashnikov whispers the secrets of modern Moscow, and if you're quiet, you can almost listen.

Anton's work raises a lot of questions and we had the opportunity to speak to him and discuss his narrative, insight and style. This is our conversation:

How did your photography journey start?

When I was twelve, my father gave me his old SLR (single-lens reflex) camera. It was not very functional but it was a real camera, and as soon as I got hold of it, I started shooting!

What are your travel essentials and what camera do you use?

I take most of my photos with a Canon EOS 300v, an Olympus OM1 film camera with a range of Zuiko lenses, and an Olympus Mju II film camera because it's very small and discreet.

My favourite digital camera is the Fuji X-E1.

What is the one thing you wish you knew when you started taking photos?

If I could give my old-self a message, I would be: learn more and practice more!

How would you describe your style of photography?

I would describe my style as "dry reality" or "grunge".

What is your favourite place or thing to photograph?

I must say that I feel the same curiosity about anything everywhere. Although I especially like to shoot the details of ordinary life with an unusual angle, I think this can give a better global understanding of people in general.

Your favourite European location and why?

I've travelled a lot in eastern Europe. I like Budapest for its architecture, and Bulgaria for its tranquillity.

But the most interesting trip I've done was in Kiev last year. The relations between our two countries are now very bad, and most Russian media speaks very bad about Ukraine. So I wanted to see for myself what was going on there, I never believe official propaganda.

I drove from Moscow to Kiev without any obstacles, and I arrived in the most beautiful and homelike city: friendly and hospitable.

When locals discovered where I came from, they would say "do not believe anything that they say about us. You are not in danger here". And it was true.

I spent 4 unforgettable days in Kiev, and I can most definitely say: there is no such thing as hostility between the people of our countries. It's all politics, this is obvious, but now I have proof.

Who has inspired your work along the way?

When I travel, I like to 'dissolve' into local life, and go looking for the differences and the similarities.

I am also inspired by the field's history and by the work of famous masters like Imogen Cunningham, Henri Cartier-Bresson, Helmut Newton and many others.

So I guess you could say curiosity and history are my biggest source of inspiration.