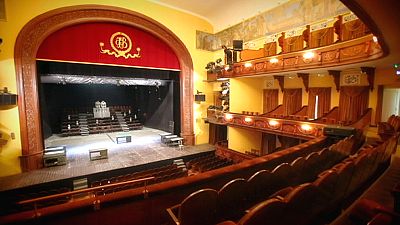 Our postcard this week is from the birthplace of Russian theatre.

Four hours by train north of Moscow, Yaroslavl is home to the famous Volkov Theatre, where Russia’s first national drama company was formed.

It was founded in 1750 by local actor Fyodor Volkov. The theatre has been rebuilt four times; the currrent building was constructed in 1911.

“It may be the country’s oldest professional theatre company,” reported Euronews’ Seamus Kearney, “but it’s still very much at the heart of Russian theatre.”

When the Postcards team paid a visit, the cast was rehearsing a modern adaptation of the Greek myth Orpheus and Eurydice … while another play was being performed in a smaller auditorium.

Evgeny Marchelli, the Artistic Director of the Volkov Theatre, said:
“Working in this theatre really fills me with emotion, and it motivates me to make it the best theatre in Russia, with a young feeling.”

The call of the wild: on safari in Bulgaria's Rhodope Mountains