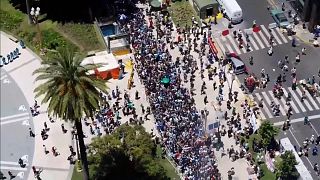 Argentines flocked to their capital's presidential Casa Rosada from the early hours of Thursday to mourn the death of football great Diego Maradona.

Thousands of Maradona fans waited to enter the country's presidential mansion where the coffin holding their icon will lie in state for the next three days.

"It is a very big emotion, the biggest Maradona, we came to thank him for being from Boca and from Argentina, the people's defender," said Mauricio Tumites, a Maradona fan who woke up at 4 am to come and say goodbye to his idol.

Maradona's wooden casket was in the main lobby of the presidential Casa Rosada, covered in an Argentine flag, a No. 10 shirt of the national team, and dozens of others of different football teams thrown in by visitors who passed by in tears.

Britons break out sledges to enjoy snow during national lockdown

Bolivians hope for health at this year's scaled-back Wish Fair

Portugal votes for new president at height of COVID pandemic