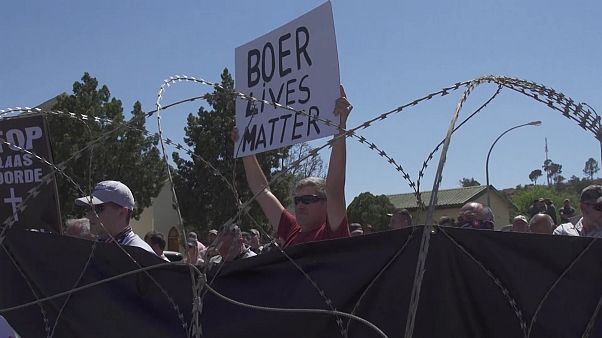 More than 100 police patrolled the area in front of the courthouse in the Free State province and used barbed wire to separate the rival groups.

About 250 white farmers gathered to protest the killing, stating that police do not adequately protect white farmers. In an earlier court hearing last week, a group of white farmers stormed the court and burned a police vehicle.

The country’s leftist opposition party, the Economic Freedom Fighters, mobilised about 1,000 of its supporters to challenge the white farmers in front of the court.

They sang songs and shouted slogans calling for South Africa's land to be returned to black residents. Many were dressed in the EFF party's red uniforms and berets.

EFF leader Julius Malema came to Senekal Friday was expected to speak to his supporters after the court hearing.

While most white farmers and organisations representing them have called for farm killings to be made a priority crime, the government insists that white farmers are not being targeted, saying the violence is a result of South Africa's high crime rate. South Africa has one of the highest crime statistics in the world, with a murder rate of just over 58 deaths a day.

The country’s official crime statistics indicate there were 49 farm killings in the 2019/2020 financial year.

President Cyril Ramaphosa, in his weekly letter to the nation Monday, condemned Horner’s killing but said the farm killings were part of the bigger crime problem.

The Senekal murder has also raised the controversial issue of land ownership in the country.

A great deal of South Africa's best farmland is owned by white farmers, as a result of the eviction of black farmers when the country was ruled by a white minority.

Although South Africa now has majority rule, land ownership remains a contentious issue, with parties like the EFF urging the government to seize white-owned land without compensation and return it to black families.

Young doctors in Barcelona take off clothes to highlight concerns

Hospitality workers serve up a protest over coronavirus restrictions

Skull sculptures laid in Mexico for Day of the Dead

People pay tribute to beheaded teacher outside his former school

Thai protesters back on Bangkok's streets in defiance of police

Rivals groups fight over mayoral office ahead of Bolivian election

People gather at George Floyd's memorial to mark his birthday